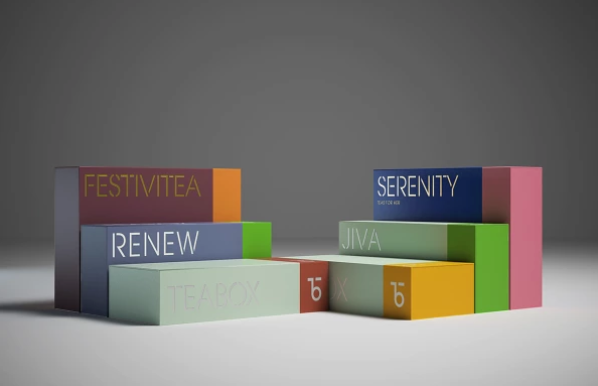 Bringing tea leaves to market involves a drawn-out process of auctioneers, agents, and wholesalers. But Teabox, an Indian company backed by a Texas billionaire, strips out the middlemen to ship its premium leaves to consumers within 48 hours of production—light years faster than the traditional three to six months. To communicate its innovative approach and help it compete in the $40 billion tea industry, Teabox enlisted Pentagram partner Natasha Jen to conceive of a forward-thinking identity.

Working with with Teabox founder Kaushal Dugar and marketing director Rohan Jahagirdar, Jen created an identity that was vibrant, sophisticated, modern, and let the product shine. She and her team viewed the identity as a kit of parts that could grow along with the brand. "The elements are in fact incredibly simple and work in concert to suggest a new outlook to tea drinking," Jen says.

The packaging features two bold colors, one that's commonly associated with the tea—green for green tea, orange for Chai, etc.—and a contrasting hue. Elegantly embossed, the boxes celebrate their contents—there's a bit of ceremony sliding one open to reveal the metal tin nestled inside.

Leaflets accompany each box of tea leaves and feature instructions on how to properly brew them, tasting notes (a la the wine industry), and detailed background on the tea itself. To streamline the information, Jen's team created custom icons.

Around the world, water is the only thing people drink more of than tea. In the United States it's a smaller market compared with heavyweights like China and Russia, but the luxurification of the product is steadily underway. For example, Samovar, in San Francisco,aspires to be "the Apple Store" of tea purveyors. Matcha is having a moment in NYC. With its stunning identity, Teabox is poised to make a splash in the industry.