Instead Of Standing, Why Not Lie Down While You Work? 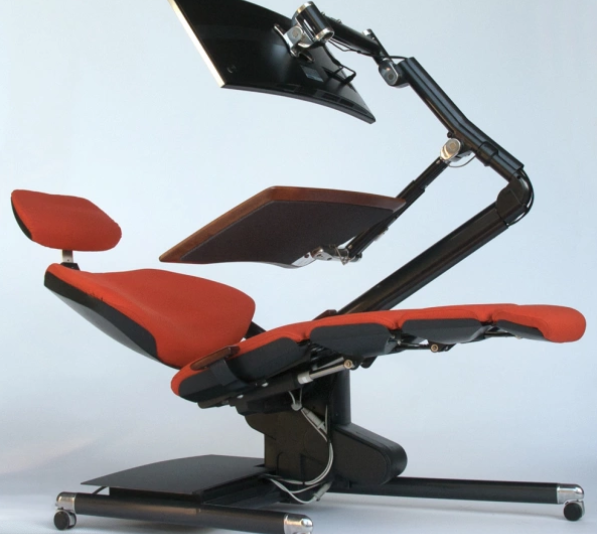 Maybe you slouch in your Aeron chair. Maybe you tried—and failed—to make using a standing desk a habit. Maybe, like me, your preferred working position is curled up on a sofa.

Is it time for an ergonomic desk and chair that lazy people will actually want to use?

The new Altwork Station, designed by aerospace engineers, has a standing and sitting position. But it also reclines fully into a "zero g" position—basically as comfortable as being in bed—with a monitor, laptop, and mouse floating the proper distance away above you.

"We end up sitting like this," says co-founder Che Voigt, demonstrating a slump in a typical office chair. "You can make one of two choices: you can say you're going to sit in this uncomfortable position because it's more protective of your body. Or, I think we can go the other route, which is, how about we just let people work the way they want to?"

At the push of a button, the desk can tweak the position of everything or fully shift back into sitting or standing. As the back moves, the monitor moves with your eyes, the desk moves with your hands, and the back headrest shifts slightly in or out to best support your head. Throughout the day, in theory, you'll keep changing position (that is, if you don't get too comfortable lying down).

"You push a button, move something for literally half a second, but all your stuff's there," Voigt says. "You don't have to readjust. That's the barrier. We think sitting's bad for you, we think standing's bad for you, we don't think being in 'zero g' all the time is going to be good for you. We think being able to move, being able to easily change positions without even thinking about it, is the solution."

Instead of someone conforming to a desk, the desk conforms to them. Voigt points to an old photo of an early office, where a typist sits hunched over a typewriter. "We blame our smartphones, but it's not our phones, not our computers," he says. "It's this idea that the machine goes on a flat surface, and we bend to the machine."

The startup began developing the desk after another co-founder had injured his back, and he hacked together a reclining workstation because it was the only way to work comfortably. When he recovered, he realized he didn't want to go back to a regular desk.

Five years later, after over $1 million invested in development and a long line of prototypes and overcoming several engineering problems, the workstations are finally ready for manufacture.

The target users: Anyone who's stuck in front of a computer all day long. In some offices, that might be almost everyone. "You could imagine walking into an office of high intensity computer user type of people—engineers, software developers—and desks could be replaced by this," says Voigt. "It would look like the business class cabin on a jet."

In other offices, the workstations might be mixed in with other types of desks. Though the design seems somewhat sprawling in person—especially compared to a seat at a table in an open office—at 18 square feet, it's actually smaller than a standard cubicle. It's also on wheels, so it can roll to the side, if needed, in a home office.

I spent a half hour reclining in the chair as I talked with Voigt, and leaning all the way back is as comfortable as it looks. The designers think that comfort leads to better work. "I've found myself to feel more creative, I feel like I do better work, I can get deeper into what I'm working on, when I can get that quiet, focused period," Voigt says.

Leaning back could also serve as a signal to others that you shouldn't be disturbed. "We have a theory that when you get into that reclined position, it's a visual cue to other folks—leave me alone, I need to think," says Jim Shissler, the startup's marketing lead.

"Yes, it looks like furniture, but we don't see ourselves in the furniture business," says Voigt. "This is a productivity tool. That's slightly different but really important to us. This whole thing is designed around the person, but when we make decisions, the first thing we think about is how can we make a high intensity computer user more productive and more comfortable. We think the comfort creates creativity, and with productivity creates your best work."

The catch? It starts at $3,900. The company is taking preorders now, and the chairs will be delivered mid-next year.