“There’s a revolution on the horizon”: will virtual reality redefine amusement parks? 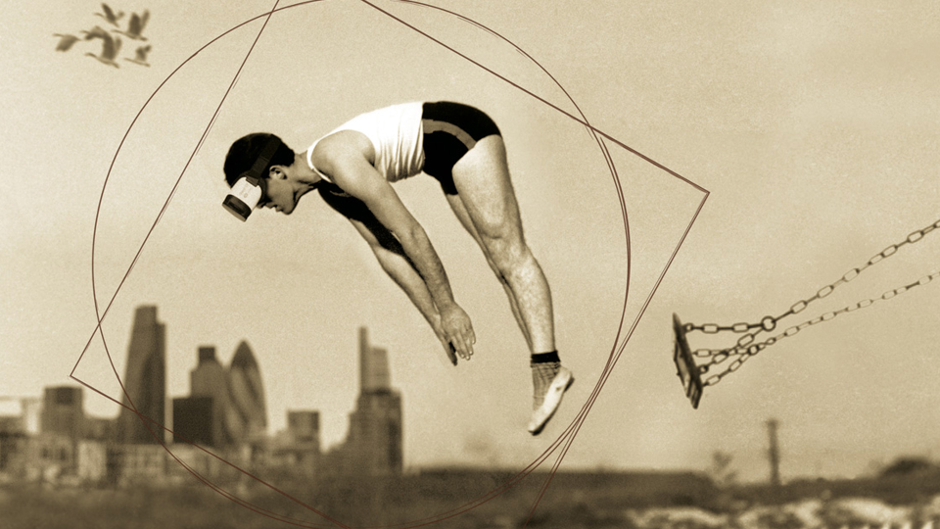 From waking up Lego dragons to intergalactic waterslides, we explore the ways virtual reality is revolutionising thrills.

People have long used Lego bricks to fuel their imagination, building worlds both real and imagined. Up until now however, it was impossible to actually become part of the Lego world. That changed with the announcement of a new virtual reality dark ride at New York’s Legoland, which promises to “turn guests into Lego minifigures”.

A dark ride is an attraction that takes place inside, like a haunted house-style ride or ghost train. But Lego Factory Adventure — which will open at the new location in July 2020 — is slightly more high tech than your average fairground ride. It takes customers on a “narrative” based on the creation of actual Lego bricks, as overseen by the character Professor Brick.

When users are locked into a ride vehicle, they will see the Lego minifigure versions of themselves projected onto a screen. The recreation is bespoke, based on physical attributes like guests’ hair colour or whether they wear glasses.

The ride — the first of its kind — is the culmination of 18 months of work between Merlin Works (which owns Legoland and Alton Towers among others) and experiential design studio, Holovis.

Based in Leicestershire, Holovis use VR and mixed media to create “personalised and multi-sensory experiences”. The Lego attraction uses the company’s HoloTrac software — a motion-based tracking technology — to render the Lego versions of visitors. It creates an interactive experience: visitors will have to wake up a Lego dragon by waving their hands, for example.

The facial detection and recognition algorithm works in less than half a second — and this seamlessness is crucial for a sense of magic. There’s no headset or waiting around for an app to load. “The technology is completely invisible to the guest,” Cliff says.

“Theme parks are all about you in a group and enjoying it as a collective experience,” he says. “Any time that you disrupt that core experience, it’s because of a misuse of technology.” 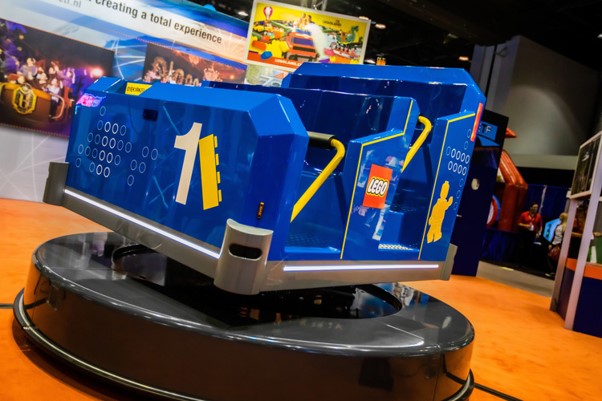 A cautionary tale comes from one of the UK’s most popular theme parks. In 2016, Alton Towers updated one of its most popular rides, Air, with a VR add-on. But after an increase in queuing times caused by users putting on headsets, the feature was removed entirely this year.

Technology has since improved and with it an increased appetite from visitors for immersive experiences. As Cliff says: “the normality of life is catching up.”

He doesn’t see a limit on where this technology could be applied. “It doesn’t have to be a theme park,” Cliff says, “you can gamify the fabric of the location you’re in.” That might include restaurants, shops, or actual parks.

“There’s a revolution on the horizon”

Cliff likens the company’s approach to Secret Cinema, the immersive film-based experiences that plunges people into the world of popular movies such as Romeo and Juliet or Casino Royale.

That ethos can be seen in Cliff’s work last year with Alton Towers on their rollercoaster, Wicker Man. The ride, based on the British horror film about a policeman who falls victim to a cult on the Isle of Man, blends new-age thinking with old-style methods. 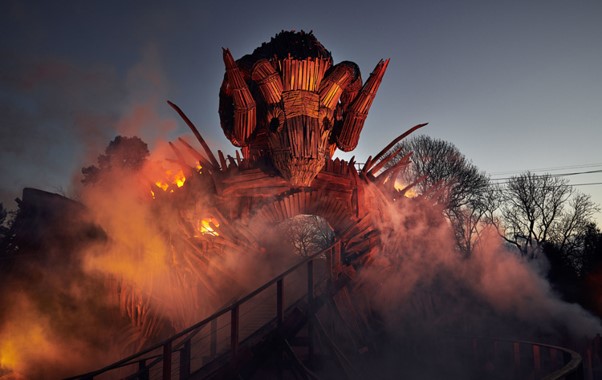 With Wicker Man, Cliff says it was obvious technology should not be used in an overt way as it would have clashed with the Pagan aesthetic of the ride and the horror film it is based on. It is also the first wooden rollercoaster built in the UK for 21 years.

Instead, Holovis used audio — creating an ominous soundtrack for the queue — and projection to emulate shadow puppetry. This speaks to the “multi-variant” ways in which Holovis is trialling technology. “We have a real opportunity to redefine what a theme park is,” Cliff says. “There’s a revolution on the horizon.”

That revolution is not just confined to dry land. While it might seem counterintuitive to mix water and technology, San Francisco-based Ballast has applied VR to waterslides. The company calls it “aquatic VR”.

Its chief technology officer, Ando Shah, says the technology stems from his fear of water. In order to get over his phobia, Shah immersed himself in water by scuba-diving in Mozambique while studying the behaviour of whale sharks.

Shah wanted to spread his newfound love of the ocean to people who might not have access to the same experience, and so developed technology for VR snorkelling. Through this, users are able to swim with humpback whales while remaining in a swimming pool. Unlike the Lego ride, this VR does require a headset — but so does actual snorkelling.

A waterpark in Munich asked if Shah could apply this technology to waterslides, which led to a six-month pilot project in Germany. Ballast created a tracking system for the slide, which uses near-field technology to create worlds for riders, from jungles adventures to space galaxies. People simply put on a headset and are gently pushed down the slide. It uses auto-start technology so for an easy boarding process.

According to data the company collects, when there are three ride options, users will often try out all worlds and then repeat a specific adventure. That high replay value is crucial for a theme park’s enduring popularity. 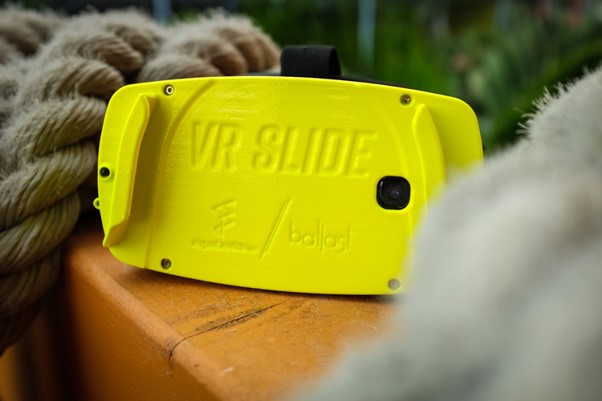 The design process benefited from being on site, rather than in a lab, Shah says. The headsets had to be lightweight (for comfort and to withstand the slides’ g-force), easy to sanitise and with long battery lives for frequent use all day. Each slide requires around 30 sets.

As for the technology itself, Ballast learned that it was better to have “sections of exhilaration” rather than a constant stream of virtual objects which was “disorientating”. They also learned not to be restricted by the physical dimensions of the rides. If a slide has a 5m diameter, in the virtual world it could be 25m.

While the Lego ride is a world-first, most people will understand it as a traditional coaster with modern technology. A VR water slide might be harder for people to wrap their heads around, and for some waterparks that might make it a risky investment. Shah says that “it took a while to show that it’s not just technologically and experientially viable but that it’s economically viable too.”

Ballast can retrofit waterslides — and although Shah does not reveal its pricing, except to say that it varies on park’s individual requirements — the process does take around two months and requires “unique” movement-tracking technology. (It can also create bespoke slides on new cruise ships, for example.) 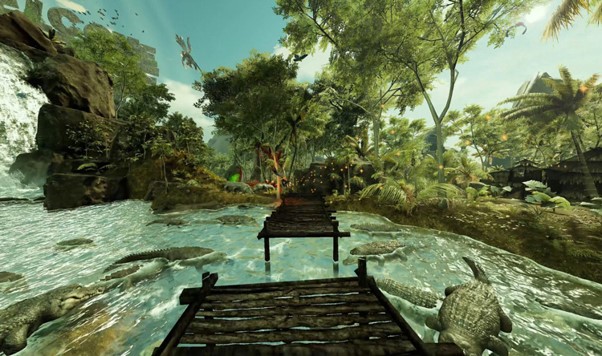 At the pilot site in Munich, there are now between 120,000 to 130,000 rides on the slide every year. Each go costs around £2. According to the company, it creates a revenue of around £150,000 every year. Ballast has now rolled out technology in waterparks in Prague and Austria, with two more in Europe and also South East Asia.

It’s trying to crack America, hoping that proven success in Europe will persuade waterparks stateside. The company’s also experimenting with a revenue-sharing business model. Ballast will install the technology for a reduced fee, or even take the cost on themselves completely, and then take a share of the park’s revenues.

“There’s life in the old arcade”

If it seems like technology is charging full steam ahead, Brendan Walker, director of experience design company Studio Go Go, thinks there might be reason to pause. Walker, who has an aeronautical background, “engineers thrill” and is not just interested in the “visual illusion” of VR, but its ability to create a fully-sensory experience.

Inside headsets, for example, are accelerometers and gyroscopes which affect physical sensations. His project, Volo, looks at how motion senses — kinaesthetic senses — can work together with visual senses to transform user experience through VR.

He used it for a project commissioned by the City of London, called Volo: Dreams of Flight, which was inspired by Leonardo da Vinci’s flying machines like the glider and helical screw. The combination of the swings’ movement and VR headsets allowed people across the city to experience sensations of flying. 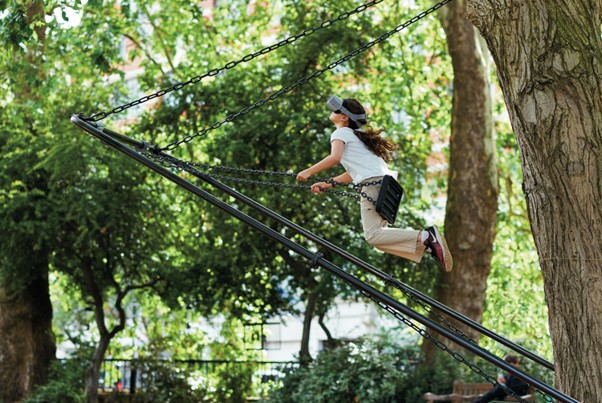 Now Walker’s applying that technology to theme park rides and expanding the traditional movements which were confined to up and down, or left and ride. For example, on the Twist ride at New Brighton’s Adventureland, Walker is combining the ride’s relatively simplistic movements — the vehicles move in a circular motion — into something more out of this world.

Using the technology from Volo, Walker has exaggerated the ride’s movements, as though the coaster’s arms are swinging wider than they actually are so that people experience sensations of flight. 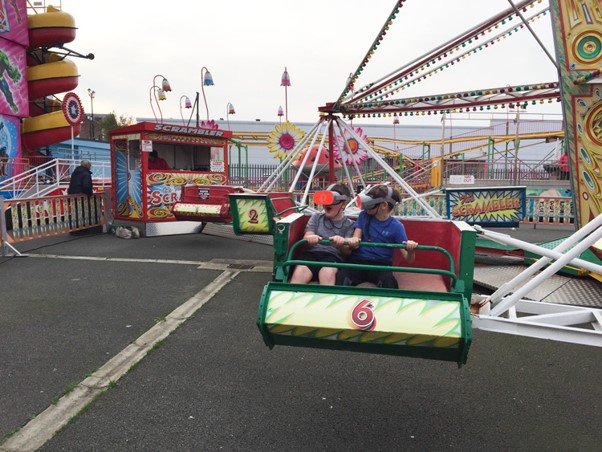 The Twist at New Brighton’s Adventureland

“What was a staid and relatively calm ride is now turned back into a contemporary thrill ride,” Walker says. “I’m finding great value in using VR to reinvigorate old ride mechanisms because there’s life in the old arcade.”

“A lot of people are concentrating on big new coasters, but I like learning from playgrounds,” he adds.

In the long term, Walker imagines a world outside the physical confines of theme parks. For this, he’s waiting for the “full penetration of personally-owned VR headsets”.

If everyone owned a headset, Walker says, they could visit a playground or even their backyard and have their experience transformed without the need to pay an entry fee. A single-day ticket to New York’s Legoland costs around £50. What that might mean for the theme park business — last year Merlin Entertainments’ venues attracted 67 million visitors worldwide — is unclear. But Walker is excited about what he calls the “democratisation of thrill”.

“People will have a theme park in their hands,” Walker says.