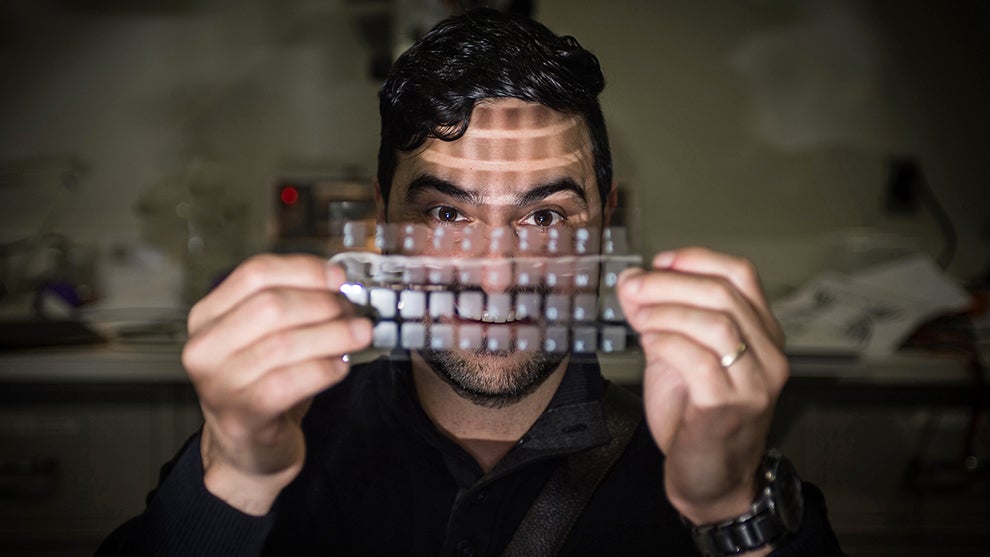 2017 might go down in history as the year those boxy speakers your dad still uses finally started to go extinct. Following the development of a heat-powered graphene chip that could replace the speaker in your phone, scientists at Michigan State University have developed a paper-thin, flexible electronic panel that could turn fabrics into speakers — among other applications.

In late 2016, Nelson Sepulveda, a Michigan State University Associate Professor of Electrical and Computer Engineering, and his team revealed a flexible, film-like device called a biocompatible ferroelectret nanogenerator — or FENG, for short — that could generate electricity and power other simple electronics as it was folded and deformed.

Made from ion-packed layers of silicon, silver, and polymide (similar to the artificial fabric nylon) covered with a foam-like material called polypropylene ferroelectret, as the FENG film is compressed it produces electrical energy. A keyboard made of FENG worked without having to draw any power from a computer, and the MSU researchers envisioned their material being used in garments that could generate power for charging gadgets as people simply moved about.

But as the team at MSU continued to develop the FENG technology, they discovered it was so sensitive that even subtle deformations made by sound waves would produce an electrical charge. As detailed in a study published this week in Nature Communications, this meant that the ultra-thin film could also serve as a microphone, one so sensitive to the human voice that it would be almost impossible to fool a voice-recognition security system that used the technology.

And because a microphone is just a speaker working in reverse, the researchers also showed that the FENG film could just as effectively convert electrical energy into mechanical energy. The material was embedded into a simple flag, and when fed a signal from an iPad passed through an amplifier, the fabric reproduced the sounds with remarkable clarity.

So one day, instead of having to bring a megaphone to a rally, the protest sign you're carrying could be used to amplify your chants with the FENG technology embedded. This thin film could also lead to further improvements in mobile devices, replacing traditional speaker and microphone components with a single module that performs both duties more efficiently to help extend your device's battery life. And even if your smartphone does hit that critical 10 per cent power mark, perhaps one day your FENG-equipped jacket will quickly charge it back up during a stroll.