Working From Home: A Beginner’s Guide 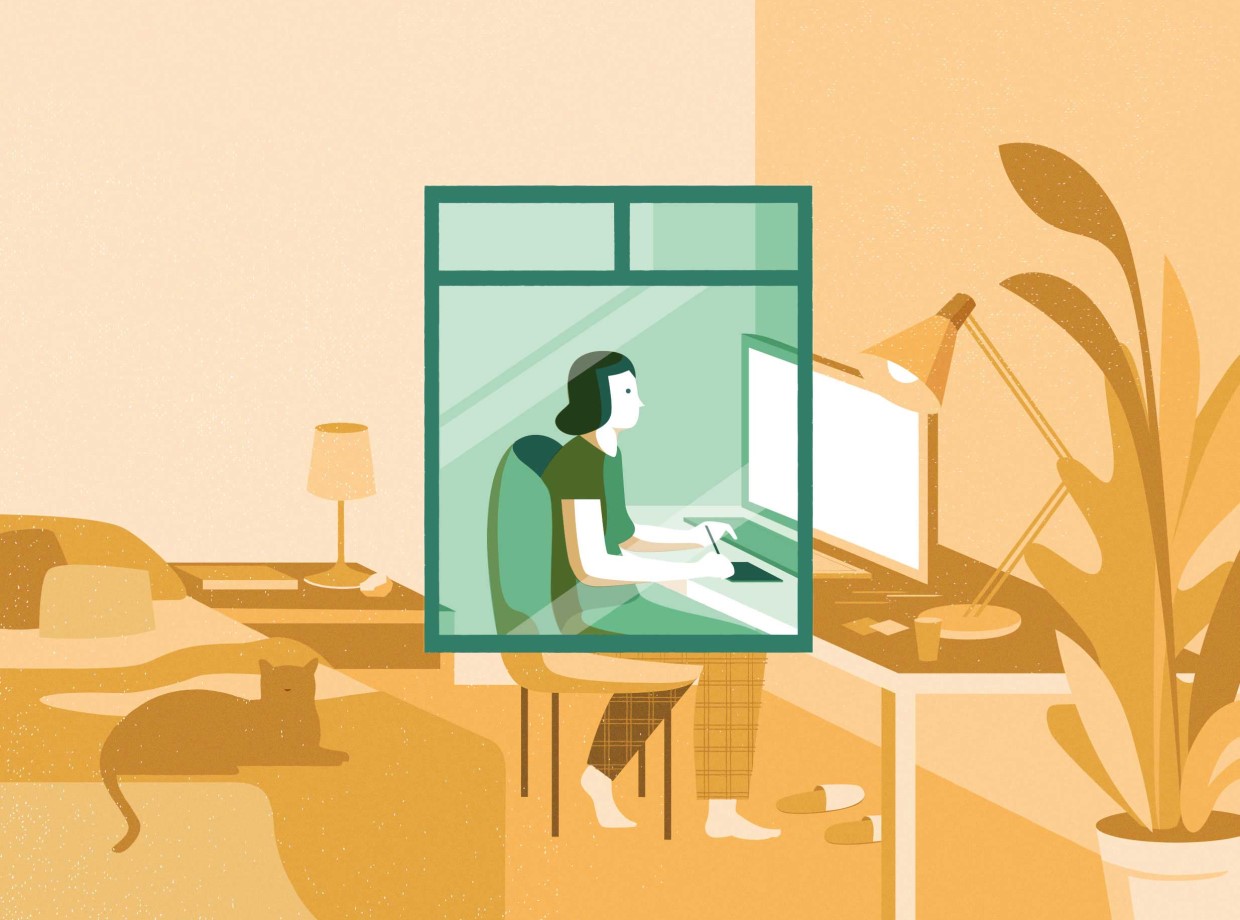 It can be a blessing and a curse. Here are tips for taking advantage of the perks without falling into the pitfalls of freelancing or working remotely.

Its surface, working from home is the dream. You can’t beat the commute, and can (in theory)  save countless hours otherwise wasted on small talk, pointless meetings, or any of the million other distractions that pervade office life.

The reality is more complicated. Getting out of bed each morning to face a to-do list alone, without the inherent structure of a work day, colleagues, and a dedicated office and desk can be as disheartening as it is exhilarating.

For nearly every upside—of which there are many, including no traffic or subway delays—there  is a corresponding downside, such as the lack of a clear divide between work and home life. That said, once you get into a rhythm, working from home can be a gift.

Below are work-from-home tips I’ve learned since leaving my office job nearly two years ago, along with advice from fellow freelancers and remote workers about what it takes to get stuff done outside the traditional confines of an office.

But first a quick caveat: None of what follows is written in stone. The beauty of working from home, along with much of the struggle, is the ability to personalize your schedule and routine. And depending on the situation, your flexibility might fluctuate. As a freelancer, I largely have the autonomy to determine when, where, and how to get work done. If you’re a full-time, remote employee on a team, your schedule might be more established—plus you’ll have coworkers to videochat with if you miss collaboration and social contact. If you’re a parent, you’ll need to work out childcare backups for when kids are home sick. If you take lots of phone calls or meetings by videoconference, you may want to create a quiet space dedicated to chatting (with a relatively blank backdrop). And, of course, you can iterate on all of this.

1. Figure out when you are most productive.

One of the most liberating parts of moving from a full-time job to freelancing was the realization that the structure of traditional workday needn’t apply. An extreme morning person, when I worked in an office I’d frequently arrive long before everyone else. I didn’t feel comfortable packing up early, though, which meant my workdays often ended long after my productivity had sputtered out.

Thankfully, as a freelancer, and often as a remote worker, you have the ability to schedule your day outside the confines of the standard 9-to-5. Now when I wake up at 5:30 or 6:00, I head to my couch and start typing. And when my productivity flags in the afternoon, I don’t feel guilty (or more accurately, as guilty) taking a midday break or even calling it a day.

If you’re a night owl the opposite schedule might apply. Figure out when you are most productive and whenever possible, organize your work day around those periods.

After you’ve determined your periods of peak performance, it’s time to establish a routine. “Try to get up at a certain time and be working by a certain time, otherwise, it’s easy to fall into the mentality that every day could be a day off,” says Daniel Stump, 27, a freelance copywriter based in Portland, Ore.

Having set parameters for when and how long you’ll work helps keep you on track. In some cases, it’s also mandatory. Kim Shandrow, 44, is a senior editor at the New York City marketing firm Group SJR who lives in Long, Beach, California. A full-time employee, her day starts with the rest of the team on the East Coast, which means she’s up and logged on by 6:30 a.m. PST.

Decidedly not a morning person, she’s made it work by sticking to a routine (and lots of coffee). “I’ve found that having a hard start time and committing to it is key,” she said. “I start every day at the same time just like I would if I was going in to the office.”

While structure is important, give yourself room to make modifications as needed. One of the gifts of working from home is that you have more flexibility; it’s a waste not to use it.

Personally, this means giving myself permission to sleep past my normal start time or take a nap midday if I slept poorly the night before (sleep-deprivation is, shockingly, not great for the quality of my writing). Even with a more rigid schedule, Shandrow takes advantage of the flexibility of her remote status. A mother of three teenagers, she will end the work day early for doctors’ visits and other “mom appointments.” She also takes breaks throughout the day to walk her dog.

When I first started freelancing, a successful freelance writer told me she owed much of her output to sticking to a strict schedule: she worked from 8 a.m. to 6 p.m., Monday to Friday, and took weekends off with no exceptions. This haunted me for a good six months. I couldn’t maintain my focus for that long and found myself working in blocks that collectively never came close to approaching a nine-hour day. To compensate, I’d regularly work on weekends and then feel guilty, like I was doing it all wrong.

Since then, I’ve come to realize that I actually like working on weekends, at least in two-to-three hour bursts. The time feels less cluttered because I don’t get as many emails, and I enter the week feeling ahead, rather than scrambling to catch up.

In general, the freelancers I’ve met are split on this. For Stump, weekends are reserved for his personal life, otherwise he feels like he forfeits any semblance of work-life balance. “You certainly could work all the time, but I don’t recommend it,” he says.

5. Either way, set boundaries. This includes taking time to exercise, get outside, and eat real meals.

Working from home, which does away with a clear distinction between one’s professional and personal life, can easily translate into working all the time.

“I have to force myself—and this is a constant battle—to stop,” Shandrow says. After a rough period, in which she found herself “working on the side of a sports field” and answering emails on the couch at night, she’s enforced a hard end point to the work day. “It’s about asserting, to myself and to coworkers, that I am not available after this time.”

Sarah Gray, 31, freelanced for more than a year before accepting a full-time position at the digital news publication Business Insider. Like Shandrow, she found the lack of established boundaries disorienting. “It’s easy to lose the balance between life and work, but you still deserve that balance,” she says.

As a freelancer, Gray received emails and requests at all hours of the day. She responded to them in real-time, until she realized it was up to her to establish restrictions. “Either set an ‘out of office’ every night that explains you are offline, or clearly set expectations of when you are online vs. offline when you start a new project,” Gray recommends.

An integral part of successfully adjusting to a freelance or remote schedule is the realization that taking time “off” time isn’t a weakness – it’s a strength. Early on in her stint as a freelancer, Gray resisted taking breaks during the day to work out – until realizing that not only did she physically feel better when she exercised, but her thinking improved, too. Staring at a screen for eight hours straight is a recipe for numbed cognitive abilities, whether you’re in an office or not.

Shandrow, Gray, and Stump all stressed the importance of taking a real lunch break. Eating a meal away from a screen is a built-in opportunity to recharge. And unlike in an official workplace, replete with microwavable containers, sad sandwiches, and takeout salads, you can make yourself a real meal. “People in offices have to plan ahead with packed lunches or go out to eat every day,” Stump says. “You don’t! Save yourself some money with some easy cooking or leftovers.”

Again, one of the hardest things about working from home is the feeling that you could – and therefore should – be working all the time. This, of course, is a recipe for burnout.

“Take days off when you want them,” Stump says. “You’re a freelancer for a reason. You don’t get healthcare or paid vacation, so take advantage of the perks you do have.”

Before I started freelancing, I pictured myself taking advantage of the unconventional schedule by going to matinees and visiting museums on weekday afternoons. For the first year, such spontaneous trips remained more fantasy than reality. The anxiety of not working during regular work hours made forays into the world emotionally draining.

As I’ve developed routines and adjusted to life outside an office, however, I’ve come around to the pleasures of a fluid schedule. Access to the world at a time when most people are trapped behind their desks is a gift. An afternoon wandering through a place that, on a weekend afternoon, would be packed—gyms, museums, landmarks, laundromats, grocery stores, pharmacies—feels like golden, stolen time.

Whether you’re freelance or remote, the ability to set your own schedule also means you can decide when a stubborn bout of unproductivity might be better addressed tomorrow. Routines are crucial, but “if you stick to them too rigidly, you may find that your productivity starts to drop,” Stump says. “Rather than spending six hours procrastinating to accomplish two hours of work, go take that hike you’ve been meaning to and come back to your work refreshed and ready to go.”

An introvert, I didn’t think I’d miss the mindless, often awkward, back-and-forth of office small talk. I was wrong.

In my first few months of freelancing, I found myself adrift, craving the office’s ambient sense of connection. For me, filling this void consists of making more plans than I ever have in my life: to meet friends with office jobs for lunch, to grab a drink with former colleagues at the end of the day, to seek out those with more lenient schedules so we can find a place to work, alone, together.

For Shandrow, working from home, even as part of team, bred a particular breed of social isolation. Despite being a full-time employee, “I felt like an outsider,” she says. To combat this, she made a concerted effort to get to know her editors and colleagues over workplace communication tools, like Slack and gchat. She also wasn’t shy about suggesting a phone call if she sensed there was a breakdown in communication. “Sometimes you have to pick up the phone and talk through it.”

She also rented an office space a few miles away from her house from a friend who also works for herself (their kids are around the same age). The setup gave Shandrow “a reason to actually get dressed in the morning.” More importantly, it provided built-in connection. “The whole point of having an office is human interaction,” she says.