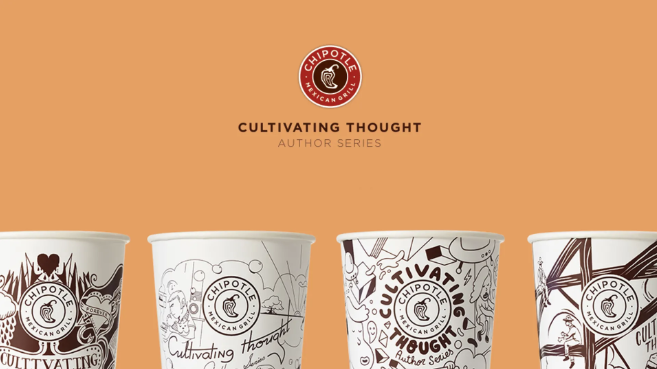 Jonathan Safran Foer was sitting at a Chipotle one day, when he realized that he had nothing to do while noshing on his burrito. He had neglected to bring a book or magazine, and he didn’t yet own a smartphone. “I really just wanted to die with frustration,” Foer told VF Daily.

Suddenly, the Eating Animals author (and vegetarian) had an idea: What if there were something truly good to read on his Chipotle cup? Or the bag? A few years earlier, he had met Steve Ells, Chipotle’s C.E.O., so he decided to write the executive an e-mail. “I said, ‘I bet a shitload of people go into your restaurants every day, and I bet some of them have very similar experiences, and even if they didn’t have that negative experience, they could have a positive experience if they had access to some kind of interesting text,’” Foer recalled. “And unlike McDonald’s, it’s not like they’re selling their surfaces to the highest bidder. They had nothing on their bags. So I said, ‘Wouldn’t it be cool to just put some interesting stuff on it? Get really high-quality writers of different kinds, creating texts of different kinds that you just give to your customers as a service.’”

Foer didn’t know what to expect, but Ells went all in. Starting Thursday, VF Daily can exclusively reveal, bags and cups in Chipotle’s stores will be adorned with original text by Foer, Malcolm Gladwell, Toni Morrison, George Saunders, and Vanity Fair contributing editor Michael Lewis. Foer says ,” Chipotle refrained from meddling in the editorial process for the duration of the initiative, which the burrito chain has branded Cultivating Thought. “I selected the writers, and insofar as there was any editing, I did it,” Foer said. “I tried to put together a somewhat eclectic group, in terms of styles. I wanted some that were essayistic, some fiction, some things that were funny, and somewhat thought provoking.”

VF Daily asked Foer if he had any reservations about working with Chipotle, given that Eating Animals offered a rousing indictment about food production in the United States, and rumors that the chain is owned by McDonald’s persist despite the fact that McDonald’s divested in Chipotle years ago. “There were things that I had to at least think about, like the fact that they serve meat, and I don’t eat meat,” Foer said. “And the fact that they’re a sizable corporation, and that I don’t tend to get involved with sizable corporations any more than I have to, and the fact that I have no interest in marketing for anyone or endorsing anything.

“That having been said, I got to know quite a bit about the company, not in the process of doing this, but in the process of Eating Animals,” he continued. “Chipotle was pointed to quite often, as a model of what scaling good practices might look like. The truth is, that’s not really why I did this. I mean, I wouldn’t have done it if it was for another company like a McDonald’s, but what interested me is 800,000 Americans of extremely diverse backgrounds having access to good writing. A lot of those people don’t have access to libraries, or bookstores. Something felt very democratic and good about this.”

If your plans this week don't include a visit to Chipotle, you can find the essays from Foer, Morrison, and Lewis below.

What’s the kindest thing you almost did? Is your fear of insomnia stronger than your fear of what awoke you? Are bonsai cruel? Do you love what you love, or just the feeling? Your earliest memories: do you look though your young eyes, or look at your young self? Which feels worse: to know that there are people who do more with less talent, or that there are people with more talent? Do you walk on moving walkways? Should it make any difference that you knew it was wrong as you were doing it? Would you trade actual intelligence for the perception of being smarter? Why does it bother you when someone at the next table is having a conversation on a cell phone? How many years of your life would you trade for the greatest month of your life? What would you tell your father, if it were possible? Which is changing faster, your body, or your mind? Is it cruel to tell an old person his prognosis? Are you in any way angry at your phone? When you pass a storefront, do you look at what’s inside, look at your reflection, or neither? Is there anything you would die for if no one could ever know you died for it? If you could be assured that money wouldn’t make you any small bit happier, would you still want more money? What has been irrevocably spoiled for you? If your deepest secret became public, would you be forgiven? Is your best friend your kindest friend? Is it any way cruel to give a dog a name? Is there anything you feel a need to confess? You know it’s a “murder of crows” and a “wake of buzzards” but it’s a what of ravens, again? What is it about death that you’re afraid of? How does it make you feel to know that it’s an “unkindness of ravens”?

I took my heart out and gave it to a writer made heartless by fame, someone who needed it to pump blood into veins desiccated by the suck and roar of crowds slobbering or poisoning or licking up the red froth they mistake for happiness because happiness looks just like a heart painted on a valentine cup or tattooed on an arm that has never held a victim or comforted a hurt friend. I took it out and the space it left in my chest was sutured tight like the skin of a drum.

As my own pulse failed, I fell along with a soft shower of rain typical in this place.

Lying there, collapsed under trees bordering the mansion of the famous one I saw a butterfly broken by the slam of a single raindrop on its wings fold and flutter as it hit a pool of water still fighting for the lift that is its nature. I closed my eyes expecting to dissolve into stars or lava or a brutal sequoia when the famous writer appeared and leaned down over me. Lifting my head he put his lips on mine and breathed into my mouth one word and then another, and another, words upon words then numbers, then notes. I swallowed it all while my mind filled with language, measure, music, knowledge.

These gifts from the famous writer were so seductive, so all encompassing they seemed to make a heart irrelevant

I spend too much time trying to spend less time. Before trips to the grocery store, I’ll waste minutes debating whether it is more efficient to make a list, or simply race up and down the aisles grabbing things. I spend what feels like decades in airport security lines trying to figure out how to get through most quickly: should I put the plastic bin containing my belt and shoes through the bomb detector before my carry-on bag, or after? And why sit patiently waiting for the light to turn green when I might email on my phone? I’ve become more worried about using time efficiently than using it well. But in saner moments I’m able to approach the fourth dimension not as a thing to be ruthlessly managed, but whose basic nature might be altered to enrich my experience of life. I even have tricks for slowing time—or at least my perception of it. At night I sometimes write down things that happened that day. For example:

This morning Walker (my five year old son) asks me if I had a pet when I was a kid. “Yes,” I say, “I had a Siamese cat that I loved named Ding How, but he got run over by a car.” Walker: “It’s lucky that it got killed by a car.” Me: “Why?” Walker: “Because then you could get a new cat that isn’t named Ding How.”

Recording the quotidian details of my day seems to add hours a day to my life: I’m not sure why. Another trick is to focus on some ordinary thing—the faintly geological strata of the insides of a burrito, for instance—and try to describe what I see. Another: pick a task I’d normally do quickly and thoughtlessly–writing words for the side of a cup, say–and do it as slowly as possible. Forcing my life into slow-motion, I notice a lot that I miss at game speed. The one thing I don’t notice is the passage of time.

Article by Kia Makarechi via VanityFair.com