Since time immemorial, schools for the youngest learners have typically been long on structure, short on stimulus. As architecture and design critic Alexandra Lange wrote in her book The Design of Childhood, “In the one-room schoolhouse, there are two pieces of design: the room and the seat.” For all the recent advances in the study of early-childhood development, most schools still rely on a similarly straitjacketed model, which Lange refers to as “one-directional education.”

But there’s encouraging news for the toddler set, particularly on the international front, where the pace of change has been remarkably brisk. In a competitive global marketplace, emerging economies and regional powerhouses alike are advancing learning spaces that can pro-mote creativity and innovation—trying to get a leg up on the future. China, for example, has a new education law aimed at reducing the pressures of homework, tutoring, and over-testing on younger students. Singapore and Korea have both developed standards to measure students’ “creative and inventive thinking.” 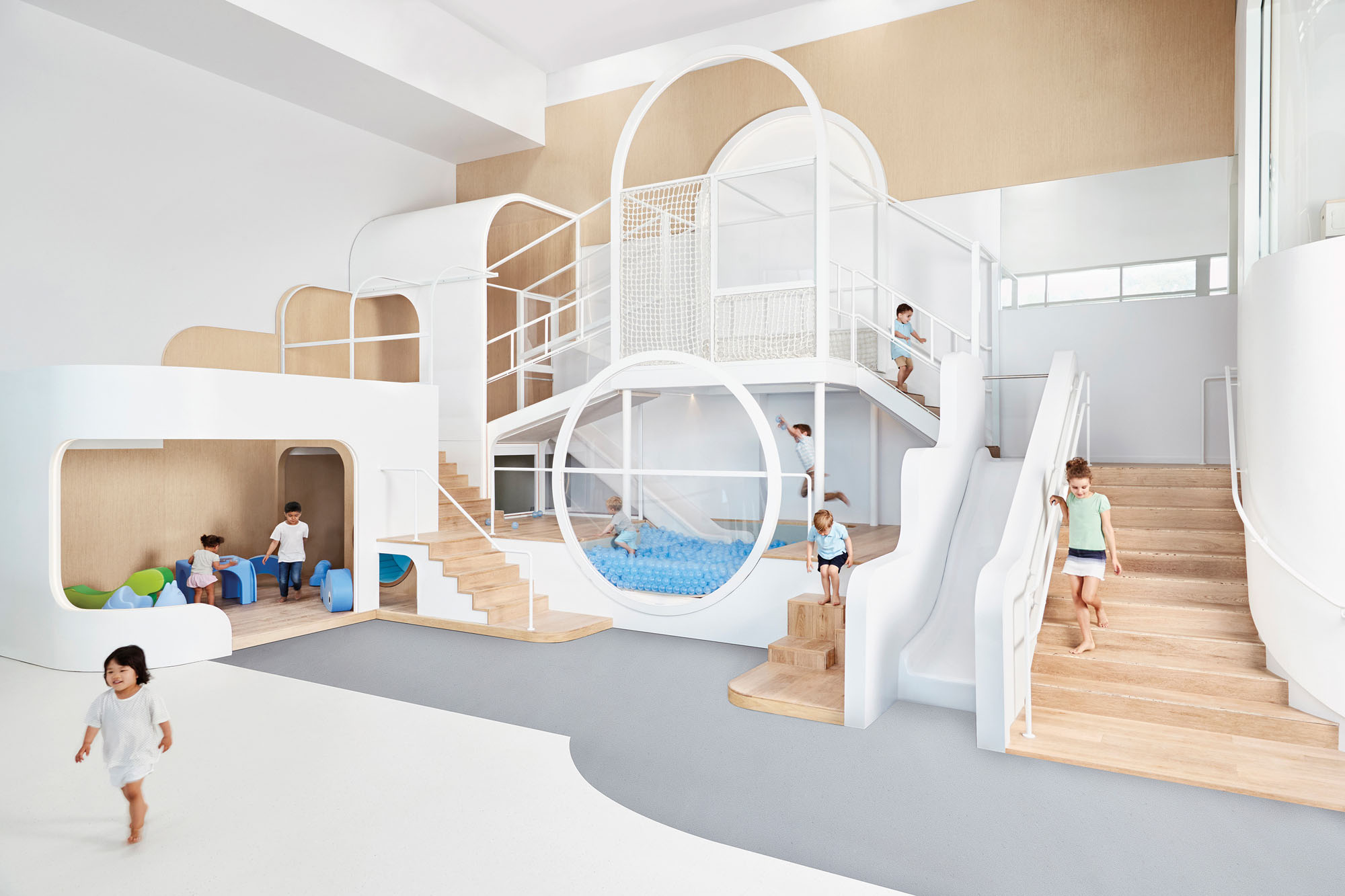 A sampling of recent projects from South Asia to Latin America shows how much attention is now being paid to design that supports creativity and exploration among the smallest members of the global community. The keys are playfulness, engagement, and connection to place, encouraging young kids to make discoveries on their own—albeit with quite a bit of visual pizzazz.

In Seoul, South Korea, local firm OA-Lab debuted its Flower + Kindergarten: a mysterious, glowing hunk of a building pierced with irregular apertures. The school opens to reveal an interior of warm wood surfaces enlivened by colorful details and furnishings. The whole scheme is designed to maximize interaction and activation: Niches and alcoves abound, and the contoured cladding panels on the exterior can be used for planting an array of seasonal flora.

Half a world away, Brazilian firm Shieh Arquitetos has created the Ecoara Waldorf School outside São Paulo, a rammed-earth and hardwood structure composed of hexagonal classrooms that open both to a partially covered interior space and to a rambling landscape. The outdoors becomes a direct tool for play and discovery, notes firm partner Leo Shieh, while the fluid interior becomes a “sanctuary space,” and a center for interaction and community. “One thing we always try to do is kill the corridor,” says Shieh, whose company has worked on schools for all ages in Brazil. In doing so, play, imagination, and activity become intimately connected to the classroom itself. The low-tech school was even built partly by its community of parents and students, making it a textbook example of learning through doing—and through architecture.

The educational world’s gradual move away from bland, one-directional pedagogy also depends on a new relationship that is developing between these learning spaces and the social and physical communities they’re being built for. “I think it’s essential to be aware of the culture that surrounds the school,” says Tel Aviv-based designer Sarit Shani Hay. “I try to create places that are accessible for all children,” says Hay, who sees her role as using design “as a tool for social change.” To that end, her designs tend to invite the outside world into the learning space—an approach exemplified by her office’s elementary school in Tamra, a majority-Arab city in Israel’s North District. Featuring motifs from traditional Arab art and architecture, such as a wall-length wooden rendering of a minaret-spiked skyline, the project includes multiple alcoves and benches, transforming the classroom into a familiar indoor village for fun and discovery. “It’s about connecting children to their roots,” says Hay. “You have to consider context.”

This sort of educational urbanism—an attempt to weave together school and city and blur the lines between the play-ground, classroom, and neighborhood—has been cropping up in an array of locales, which speaks to its appeal and adaptability. For their library addition to the Sharda School in Kopargaon, India, architects Sameep Padora and Associates fashioned a brick roof that leaps over the reading room below, forming a continuous structure that doubles as a walkable viaduct for pedestrians. Locals can wander freely across the site, strengthening the bond between the community and the institution. “We wanted to create a seamless connection with the landscape,” 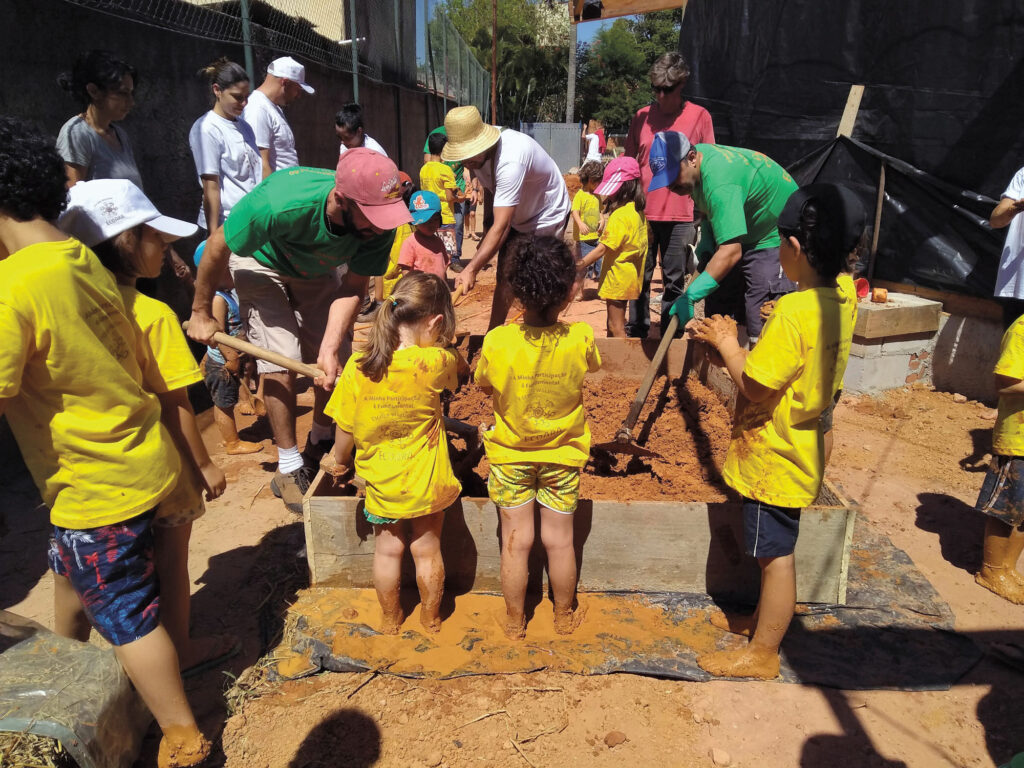 Padora says. And while the project has largely succeeded in that regard, it has also had the unanticipated effect of making schoolchildren a part of the urban action. “They’ve been using the vault as a slide,” says Padora.

Including civic participation as a part of the learning experience is just one way that this holistic approach is blending educational and public spaces. In Shenzhen, China, during the city’s 2019 architecture biennial, designers at Beijing firm People’s Architecture Office unveiled a project they call the Plug-In Learning Box. A modular system for school construction, it is intended to create a low-cost, quick-to-build education solution for China’s fast-growing cities. With a footprint that can be easily reconfigured, the system can be inserted into the urban fabric to bring school to children rather than the other way around. The firm completed a modified version of the concept in 2020, also in Shenzhen.

One of the most charming, inventive projects in this emerging idiom also demonstrates its potential pitfalls as a community-centered early-education design. Technically speaking, NUBO is—or, rather, was—not a school at all. Designed collaboratively by Australian firms Frost Collective and PAL Design Group, the commercial children’s center in Sydney afforded an open-ended, user-driven space for creative exploration and growth. Wandering through the two-floor, multi-room space, kids could take up activities ranging from cooking to making art to just hanging out, all in an elegant ambience slightly reminiscent of a hip downtown café (albeit one with a big chrome slide in the middle of it). The referencee was no coincidence, as NUBO sought to include parents and caretakers, not as chaperones but as active users navigating the space alongside their young charges in a collective intergenerational experience. Unfortunately, NUBO proved too communal, shutting down permanently last November owing to the COVID-19 pandemic.

The same perils that confront the city are bound to confront educational urbanism, wherever or however it manifests. And yet the case for a more embedded, outward-facing educational architecture in the United States is compelling, especially for those about to have their very first encounter with the sometimes scary-seeming world beyond the nursery walls. 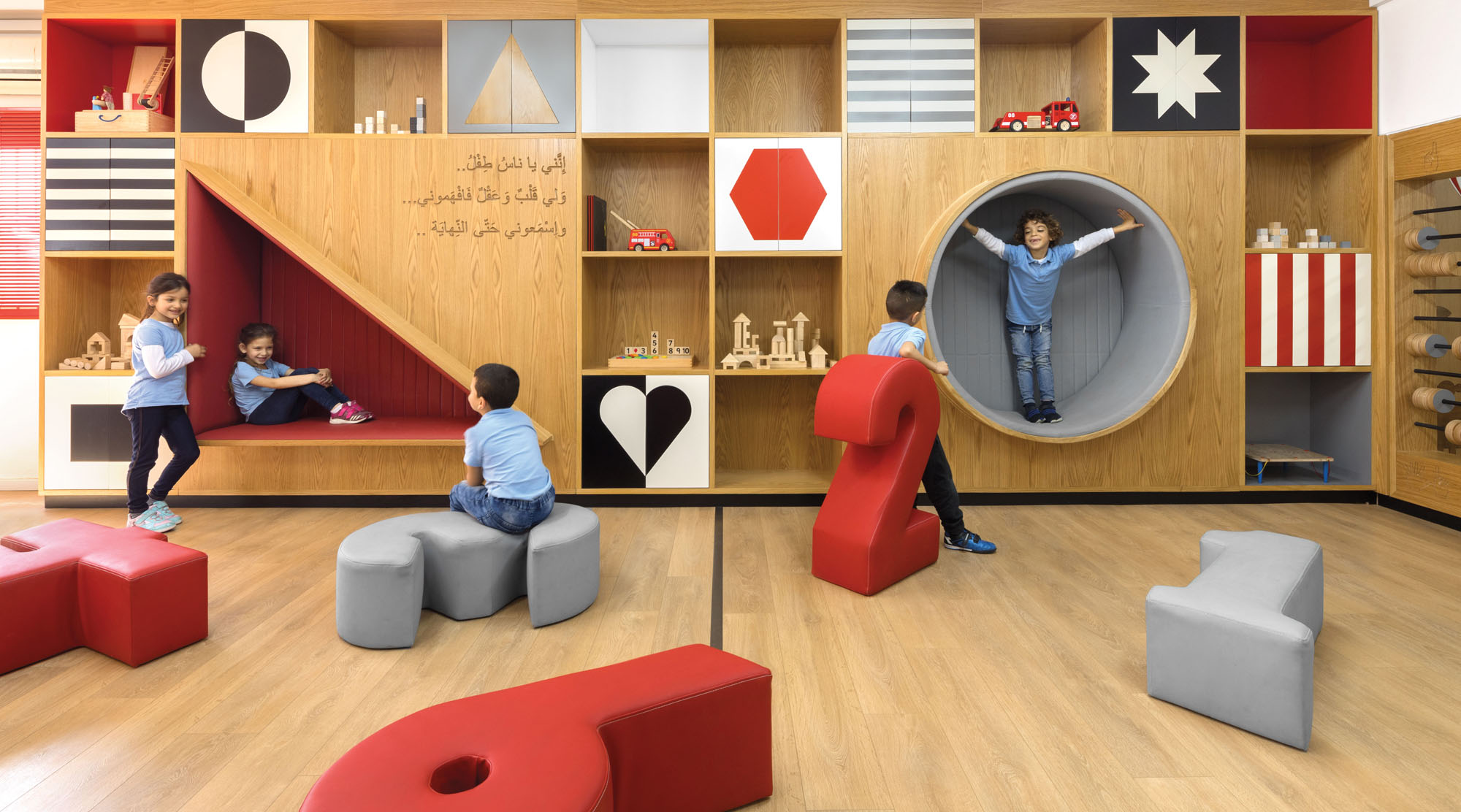 “In this country, we still create schools the way we did 50 years ago,” says Ron Bogle, CEO of the National Design Alliance and team leader of Reimagine America’s Schools, a nonprofit that seeks to change the way education spaces get built. From his point of view, accelerating technological and social changes demand that we look beyond the one-directional brick box, to see schools instead as part of a larger urban whole where even the smallest children can feel at home. “You have to think of the school and the neighbor-hood as a single system,” he says. “Parks, services, affordable housing…if you surround them with that, you can make schools vital centers for renewal.”